Be Resolute in Business and in Life

I started my career many years ago, 1985 to be exact, in a Macey’s store on 1600 North in Lindon working graveyard shifts as a freight crew stocker. At the time, I was paid minimum wage ($3.35 an hour). I felt great about what I was making and immediately fell in love with the work and the business although, at the time, it was a job and not what I thought would become my passion and lifelong career.

About a year after starting, I was asked to move to Logan and work as the Non-Foods Manager in the new Logan store which the company had just opened. Eventually, this store was merged into what is now our Providence location.

It was now 1987 and Macey’s had five stores: Lindon where I started, South Orem in Carillon Square, Salem, Ogden and Logan where I was currently working. We began hearing about some shakeup that was happening with our small corporate office staff. The talk around our store was that there was trouble in the company and most of the office staff was going to work in stores. This talk became reality when we got a new store director in Logan who had come from the office. Other members of the office staff began working in stores several days a week and did their office jobs at night and on weekends.

It turned out the company was struggling for survival with some poorly performing stores and trying to get the huge investment of the new Logan store to start paying off. The number of Macey’s stores dropped to four after the Ogden store was closed but this alone did not fix the huge challenges the company faced. I could not understand the extent of the trouble but later learned things were very desperate for Ken Macey and his family and the company that was their legacy and namesake.

Ken was called by the bank who held the company’s debt and told they were calling all his loans due immediately and proposed taking the company to retire the debt. They offered him $300,000 for any remaining assets and told him he should “go find a job.” This ignited a raging fire in Ken and he dug deep to figure out how to save his company and the stores.

Ken approached another bank about transferring the company’s debt and providing some needed capital. He leveraged his home against the new loans and went back to the bank that had turned their back on him and paid them off. The company was reorganized to be leaner and more efficient. We evolved from being “Macey’s Sack and Save” to “Macey’s” and moved from guests bagging their own groceries to full service. We also revamped our marketing approach to emphasize a low-price message.

Ken personally visited each stores’ weekly department head meetings and shared the plan with everyone. The office and store teams became engaged and energized to turn the business around. By the end of 1988, Macey’s was generating more cash flow and profit than ever. Things were clicking in Logan under our new store director’s leadership and we were about to acquire a Farmer Jack store in Spanish Fork and relocate from the tiny store in Salem. During this time, I was moved from Logan to Carillon Square as the Grocery Manager and then moved again to work in the new Spanish Fork store as the Non-Foods Manager as we opened this new store. It was an incredibly fun time to be part of all that was happening.

Plans were drawn for a new, state-of-the-art store in Orem on 800 North to replace the Lindon store. This store was built in 1990 and was unlike anything the industry had seen. It marked a major triumph for Ken and Macey’s and sparked the rapid growth of Macey’s through the 90s.

Ken’s resolve shaped what Macey’s was and what we became. His resolve had a major impact on who we are today at ARO and AFS. Had Ken taken the path suggested by the bank back in 1987, things would be significantly different for us today.

I share this story as an example of a leader being incredibly resolute personally and professionally and then inspiring the same determination in an entire team of people.

Ken’s resolve shaped who Macey’s was and who we became, and I dare say had a major impact on who we are today at ARO and AFS.  There is no doubt that had Ken taken the path suggested by the bank back in 1987 things would be significantly different, for it is likely Macey’s would not exist today. 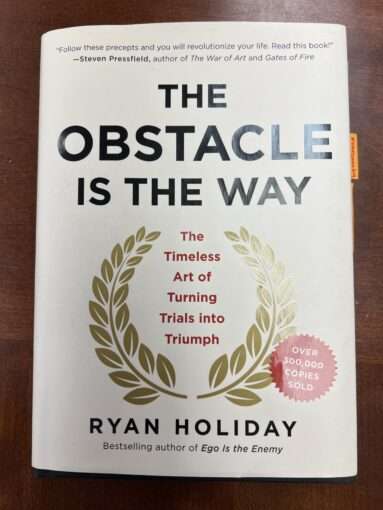 In revisiting this story and the history of this part of our company, I am reminded of the basic principle of the book “The Obstacle is the Way” which is that we must turn life’s trials into triumphs. It is easy to see a huge rock in the road and look for another path, something that may be easier. However, as demonstrated by Ken when a “rock” blocked his path, we find dealing with challenges head-on and removing the obstacle can lead to the greatest triumph.

In business and in life we are constantly faced with challenges and trials, some small and others very large. We are an incredibly resilient company and demonstrated this brilliantly the past few years in all we dealt with relating to Covid-19. Our challenges were massive and ever-changing and still, nearly three years later, we are faced with the ever-evolving landscape of our business.

Although I would not have chosen this path with the illness that created it, we have become a much stronger, more unified and resolute company because of it. It has presented huge challenges and these obstacles took much of our time, attention and focus. The situation also provided us with incredible opportunities in sales and profits which we have used to reinvest in our stores, our team and our company. We have become better and more disciplined operators out of necessity to keep our team and guests safe and we have become an even more resilient and resolute team through it all.

I will close with a story told by one of Bob Obray’s family members when they asked him how he was feeling in the late stages of his illness. He responded by simply saying “resolute.”

I think it’s important to understand this definition. To be resolute is to be “admirably purposeful, determined and unwavering”

The definition of “resolute” is powerful to me and I hope each one of us will follow the great examples of Ken Macey and Bob Obray to be admirably purposeful, determined and unwavering in all that you do.

Thank you, Bob and Ken.