“We want to hear from the team. We want to know about their families, their hobbies and their backgrounds,” said Bob Obray, president and CEO of AFS. “These are casual meetings that allow us to chat. Sometimes our work is so encompassing that we don’t set time aside to simply talk and SnackChat is an opportunity to have meaningful conversation with each other.”

While some of the meetings occur in conference rooms, others may happen around a pool table in the distribution center or on the newly covered patio at the corporate office. Horseshoes or cornhole may also be part of the fun. 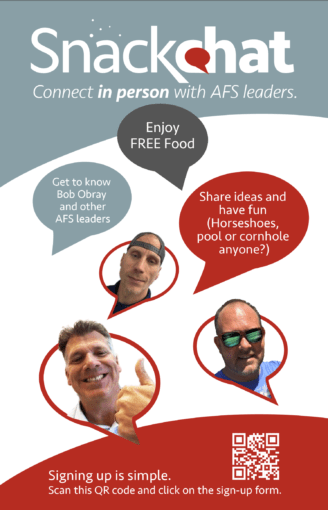 “We may play games and there will definitely be food,” said Bob. “We have had a few of these conversations so far and they have gone extremely well. It’s been great for me to interact with so many team members in an informal way.”


Bob plans to attend each meeting and be accompanied by other company leaders as well.

“It’s a great chance for us to take a breath and talk with Bob,” said Jason Sokol, vice president of marketing for AFS. “Part of the marketing and rewards teams recently had the opportunity to meet, and I heard incredibly positive feedback from our group. It was fun to listen and participate as they engaged in conversation about a wide variety of topics.”

Team members who are interested in participating in a SnackChat session are encouraged to speak with their supervisor. Supervisors will work with Lezlie Sanders to arrange a time and place for their session.